It’s midnight. After a long stretch of unusual tossing and
turning, you’ve finally gotten to sleep when the harsh ring of the
telephone jostles you awake again. Muttering to yourself, you
fumble for and answer the phone.

Immediately, any thoughts of going back to sleep vanish from
your mind. It’s your odd Uncle Elroy, and he sounds terrified! As
solid and unflappable a fellow you could ever meet, Uncle Elroy is;
anything that could send him into a panic, must be
big.

Uncle Elroy asks you to meet him at his home, right away. You
ask him what’s going on but he says he can only tell you in person,
and that it’s very important that you come quickly, and that you
come alone. More than that he won’t say, no matter how much you
ask. So, resigned, you say a hasty goodbye and get ready to go.

You arrive at Uncle Elroy’s a short time later. An older,
moderately run-down place at the end of a dark and lonely road,
Uncle Elroy’s house isn’t the most inviting at the best of times;
at this time of night, and under these circumstances, it’s
unnerving. And as you reach the front door, the peculiar emblem
that has been on it for as long as you can remember does nothing to
set you at ease … 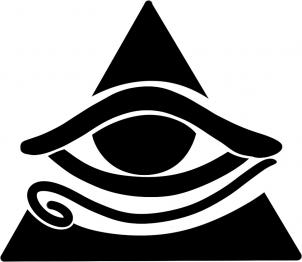 You knock and Uncle Elroy silently opens the door, takes a
hasty look around, and pulls you inside before quickly closing the
door again behind you.
“Are you alone?” he asks.
You nod quickly and ask, “Uncle Elroy, you’ve got me scared half
to death. What is going on?!”
Uncle Elroy sighs, a long deep sigh. “Okay, I’ve dragged you out
of bed and into this mess, I owe you an explanation. But this is
important—you can’t tell anyone what I’ve told you, or showed you,
here tonight. No matter what! Agreed?”
“Sure, whatever, anything you say—just tell me what’s going
on!”

And with that, Uncle Elroy launches into a tale about a secret
society of which, unbeknownst to you, he has been a member since he
was in his teens: 動物観察者の秘密. He tells you that the
Order was founded some 85 years or so ago to keep an eye on strange
happenings in the world of animals. And then he tells you about his
role in the Order – he has been one of its Recorders for
the last 15 years, keeping notes in its official Journal as
instructed by the Chief Recorder.

“But tonight… tonight!” he goes on, his face suddenly ashen
and his voice anguished. “Murder! Betrayal! Skulduggery!
Tonight, one of our own went mad! Started saying the whole Order is
a joke, a mockery, a fool’s errand – and that our sacred mission
has been a waste of our time, of our very lives! And then he just
went into a maniacal rage! I was studying a page of the Journal
when he ripped the thing straight from my hands and hurled it into
the fire! And what happened next…. oh, the destruction! the
blood! the screaming!”
Uncle Elroy’s eyes dart frantically around the room as if he
expected the very shadows to come alive and renew the violence he
is recounting. You try to calm him before he does anything rash.
“But you got away, and now you’re here in your own home, safe and
sound. Right?” you reassure him.
“Yes…,” he quavers. Then, emphatically, “Yes! And
that’s not all! I have something to entrust to you, something very
important, that he doesn’t know I have…
if!”
You eye Uncle Elroy expectantly. After a few moments of silence,
you ask, “… if?”
“If, you prove yourself worthy!”
“Worthy of what, Uncle Elroy?” you prod.
Uncle Elroy looks around, then whispers triumphantly to you,
“Worthy to join the Secret Order!”

Uncle Elroy leads you to the desk in his study, and motions
for you to sit. A few dashes to this cupboard or that storage trunk
later, he spreads out before you a sheet of questions, a quill pen,
and an ink well. Unsure of what you’re getting yourself into you
try to demur, but he’s having none of it. “This is
important!” he hisses, stabbing a weathered finger at the
paper in front of you. “My time is nearly ended anyway, and I’ve
always thought you were the only one I could trust to take my
place. Why not now? The old giving way to the new…”
Lost in thought though he now seems to be, you nevertheless can
see he won’t take no for an answer. Besides, it is a
little intriguing …
You peruse the questions. There aren’t many.

“What an odd test!” you think. With a shrug, you proceed to
answer the questions. Good thing you remember all your Uncle’s
ramblings when you were younger… and now you know why he seems to
know so many weird things about so many animals!

Before you know it, you’ve answered all the questions. Uncle
Elroy gives you a wink as he shifts an old painting of a wildebeest
to the side, revealing a safe hidden behind it, built into the
wall.
“It’s in here. The page from the Journal that I was able
to salvage! You see, when he ripped it out of my hands, I
was holding that single page … and it tore right out. My heart
nearly rent in two as I heard that tearing sound, but now I am
overjoyed that this page alone, of the whole Journal, was saved
from the fire. Though it got a bit singed, I’m afraid, when I tried
to save the rest of the book.”
You walk over to 安全な, your curiosity beginning to overwhelm you.
Why is this page so important to your Uncle?
“If you have shown yourself worthy,
this safe will open for you. And if so, I will charge you with one
final task to show yourself worthy to follow in my footsteps as a
Recorder — once you have opened 安全な, and found the page,
you must tell me the two entries which were on the very next page.
I can tell you only this — both entries were added this year!”
And with an expectant air, Uncle Elroy steps aside to let you
reach 安全な. You see the single dial is massive; it has 64 positions,
labelled with letters and numbers and a couple symbols. You
hesitate, daunted and unsure what to do. Then, your Uncle snatches
up the exam paper from the desk and thrusts it at you.
“Here, now, do what must be done!“